The history of the estate

Courson : from yesterday to today

In 1534, Gilles Le Maître, Advocate General to François 1st and first President of the Parlement de Paris, purchased land at the centre of an agricultural region known as called Cincehours, in the French province of Hurepoix. In 1550, he decided to build a house there : Courson was born. Following a succession of owners, including an explorer, Balthazar de Fargues, who was eventually hung in 1672, the Estate became, by royal donation, the residence of a long line of parliamentarians : the Lamoignon.

The Residence of the Lamoignon Family

From Guillaume, President of the Parliament of Paris, the Château passed into the hands of his youngest son Nicolas, a senior official who was one of the most influential figures of his time. Under the Lamoignon Family, the mansion of the Le Maître family was gradually transformed into a noble residence, open and full of light, similar to other illustrious residences such as the Château de Rosny, owned by the duc de Sully, and certain buildings at Versailles.

A French formal garden in the style of Le Nôtre, put the Estate in the fashion of the day. The son, and later the grandson of Nicolas Lamoignon both lived in Courson, but the latter died without children and in 1775, the property was sold to Guillaume Joseph Dupleix de Bacquencourt, an ancestor of the current owners.

The Residence of the Dukes of Padua

A few years and a revolution later, Anne-Rose-Zoé de Montesquiou, whose mother was the only surviving relative of Dupleix, inherited Courson. At that time, she had just married Jean-Thomas Arrighi de Casanova. This second cousin to Napoleon Bonaparte was trained as a youth in the Imperial Fleet. His military prowness earned him the privilege of being granted a title of nobility by Napoleon : the duc de Padoue. Returning from exile in 1820, the Duke launched a major campaign of restoration work at Courson, including the transformation of the French formal garden into a romantic landscaped park opening onto the surrounding countryside. He introduced many new species of plants and trees to the grounds of the Estate. His son, Ernest de Padoue - a prefect for the département of Seine-et-Oise and Minister of the Interior in 1859 - also undertook major renovations of the house and grounds, aiming to create the effect of a large rustic villa. He also improved the grounds by having an artificial lake built, with the help of the Bühler brothers.

The Renaissance of the Gardens at Courson

Upon the death of Ernest de Padoue, Courson passed into the hands of the Caraman family. Ernest de Caraman was an officer and moved to Courson in 1920, having decided to devote his life to its restoration. His grandchildren, Hélène Fustier and Olivier de Nervaux-Loÿs, encouraged by their spouses, Patrice Fustier and Patricia de Nervaux-Loÿs, took over the restoration campaign from their grandfather. For a number of decades, they have souht to ensure that the Estate lives all year-round by opening it up to the public. In  1980, they met with the landscape designer Timothy Vaughan, a meeting that played a decisive role in the revival or renaissance of the gardens. At the time, there was a growing interest in gardening and gardens throughout France. In 1982, the Association des Parcs Botaniques de France (Society of French Botanical Gardens) invited Courson to be the host of its annual event, the Journées des Plantes. This famous French flower show moved to the Domaine de Chantilly in 2015. Labels and signs throughout the grounds allow the public to discover some of the Estate's most remarkable trees and shrubs. Courson has also made considerable efforts to become a more family-oriented destination with the creation of a discovery trail, especially designed for children : the Hippolyte Trail. 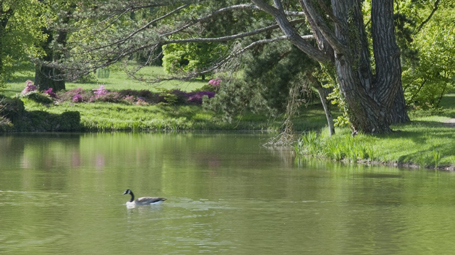 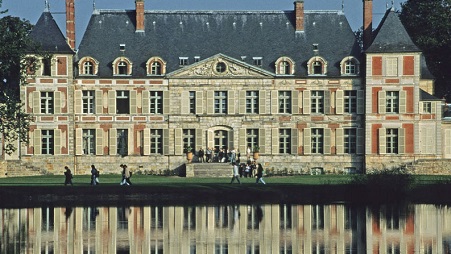 The architecture, layout and interior decoration of the Château attest to the desire of its successive owners – all passionate about gardening – to integrate the residence into the beauty of its natureal surrounding.